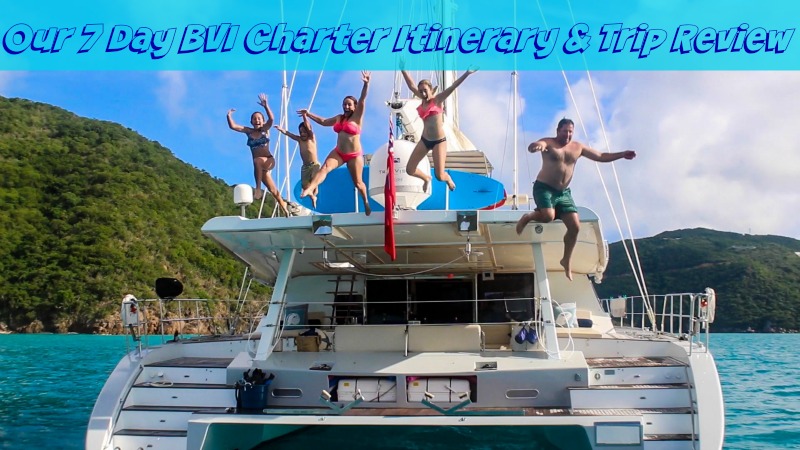 As a travel writer, I not only want to share our family’s travel experiences but also provide useful information such as a sample 7 day BVI catamaran charter itinerary.

Our first catamaran charter with our 3 kids was not near as successful as this one, because I was naive and uninformed. In fact, I wrote an article on how NOT to choose a catamaran charter boat after that trip. I strongly advise anyone who is chartering in the BVI for the first time, to read that article first! If you choose the wrong crew, your vacation will likely suck. There is no itinerary on the earth that is going to fix that!

This year, we were a lot wiser on how to choose a charter boat and crew.  After numerous email conversations, we decided to book our BVI catamaran charter on Miss Kirsty. If you want to see what a week in the BVI on Miss Kirsty looks like, take a few minutes to watch our video.

As you saw in the video, we had a blast on the Miss Kirsty Catamaran. Our days were filled with fabulous food, water sports, snorkeling, and a ton more! Funny enough, the number one question I get about chartering a boat is “whether their kids would like it?”

Are you freaking kidding me? Let me strip this one down for those who wonder the same thing.

Your kids will spend a week with their bathing suits being the fanciest outfit they are required to wear. An indoor hot shower is always an option, but they will likely just wash down on the back of the boat at the end of the day because its quicker. If you choose wisely, your captain will be your kids best friend as his will take them tubing as many times as their little hearts desire. Yup, it really is to good to be true for a kid. A week without having to beg Dad to take them just one more time! If you choose the Miss Kirsty Catamaran, then captain Niall will even take the kids wake boarding in the rain! Try asking Dad to get pelted by rain drops so little Johnny can go for a spin on the board….not gonna happen!

Everything is so easy and simple on a catamaran trip. Let’s take snorkeling for example. There is nothing worse for a kid than waiting to do something, right? On a catamaran charter, if little Johnny wants to go snorkeling its as easy as grabbing your mask and jumping in 24/7 !

Unless your kid is addicted to video games and does not like to get wet, there is no freaking way they could dislike this trip.

I also like that the BVI catamaran charters are all-inclusive. Not the all-inclusive you experienced on your Spring Break Carnival cruise ship, but the kind where every meal is prepared with your personal preferences in mind.

The crew will send you a “preference sheet” prior to your arrival, which I imagine looks something like Taylor Swift’s rider for her concert tour. I almost felt guilty while filling out the preference sheet for Miss Kirsty.

From an outsider looking in, it paints a picture of a well to do family who is is very picky. “We don’t drink any Pepsi products, only Coke, and I really dislike Coke Lights.” If Niall ever mentions it to you, I stand firmly behind the fact that I can tell the difference between a Diet Coke and a Coke Light with a blind fold on 🙂

Kirsty is the chef on the aptly named Miss Kirsty catamaran, and she is a damn good one. I can honestly say that we were blown away by her talent as a chef. If you pick Miss Kirsty for one reason alone, it would be for the food! One of my favorite meals of the day was not actually a meal, rather appetizer hour! Who wouldn’t love an appetizer with an amazing sunset ? On our previous catamaran trip, the captain did not “take to Murray.” I would be a very wealthy woman if I had a nickel for every time he ran after him yelling in his Polish accent “Muuurrrayyy don’t do that!” To the contrary, Niall was kind to Murray and they went out of their way to make the kids feel at home. I also noticed that captain Niall would often choose to motor instead of sail if there was not much wind or if it was more practical. On our previous trip, the captain sailed regardless of whether it would be more convenient for us to motor. He was not going to spend the extra money in fuel period. We spent countless mind numbing hours sailing at a seemingly snail pace on that trip.

I can’t stand a cheap ass, its a huge pet peeve of mine, so you can imagine how well I got along with that captain.

Speaking of going places, I will outline for you our BVI charter itinerary and things to do at each location.

We started in St Thomas because its a cheaper and easier airport for us to fly into. Many of the catamaran charters want to start in Tortola, and I understand the reasoning behind it. However, it costs us double to fly into Tortola and it takes double the time to get there. We were happy that Miss Kirsty would accommodate a St Thomas pick up! It did cost us an additional $600 each way, but it was well worth it.

FYI: There is a difference in being cheap and being practical.

We boarded the catamaran charter and set sail for St. John where we spent our first evening. We woke up, and immediately took in the view of our home for the next week. Treasure Island is home to the caves, where you definitely should stop for a snorkle. I always forget this, but a waterproof flash light would come in handy when you are at Treasure Island snorkeling the caves! It is quite dark in those caves. Peter Island is a private island and resort. Luckily, Niall has developed a relationship with the owners of Peter Island which enabled us to go on land.

We played tennis at Peter Island, and I went for a run. The Peter Island running trail is not for sissies, and I was on the sissy side of running ability during this trip.

I am not exaggerating when I say that the incline shown in the picture below goes for 2 solid miles with no switch-back breaks. Needless to say, I had to take a selfie when I made it to the top! This was my first and last time running on this vacation. I think I was delirious when I took this picture. The view one the way back to the boat made up for it. If I had to skip one of the ports, it would be Cooper Island.

Let me start off by telling you that Cooper Island is many sailors favorite place to moor. Cooper Island is a very friendly island that welcomes boaters to their restaurant, bar, beach and coffee shop.

The reason that I would skip it is that the water is not as clear at Cooper Island. Niall said its due to seaweed. I can see how looking at crystal blue water gets to be the same old thing if you live here, but it was far from getting old to me.

On the bright side, we had the most amazing sunset of the entire trip at Cooper Island. The Baths are awesome, but Spring Bay is better.

The Baths are often crowded with tourists so definitely shoot for the afternoon instead of the morning.

While you are waiting for the crowds to disappear at the Baths, go to Spring Bay! Our kids favorite place in Virgin Gorda is Spring Bay where they jump off the rocks over and over and over again. I always forget this, but you should bring a cooler as there is nowhere to buy drinks or food. We would have spent an extra night in Virgin Gorda if we were not already staying another week at Necker Island. I highly recommend mooring at the Bitter End, and visiting Saba Rock. Don’t miss happy hour at Saba Rock where you can hand feed the Tarpon!

A lot of people skip Anegada because it takes the most time to get to. However, I think Anegada is a “don’t miss” destination on a BVI catamaran charter. Anegada is a completely flat island that is known for its lobster. It’s fun to rent scooters, and head to one of the many beach bars on Anegada for a Lobster lunch. I recommend visiting Cow Wreck Beach and Loblolly Beach.

In my humble opinion, the restaurant at Loblolly has the best lobster on Anegada. However, Cow Wreck has a better beach. The island is small so visit both! Guana Island is a private island, and one that we were technically not allowed to visit. It was our experience that they really don’t care if you hang out on their beach, so enjoy!

Diane Furstenberg and her billionaire husband also thought this was a nice place to moor for the night! Jost Van Dyke is home to Foxy’s and Soggy Dollar which are probably two of the most well known beach bars in the BVI. We swam into Soggy Dollar as that is the only way to get there! However, we swam back for another one of Kirsty’s delicious lunches. This is what it looks like just before you are crushed into the bubbly pool! Only the brave or stupid, Im not sure which one it is, will welcome a beating from the Atlantic. We were supposed to be flying home, but you know how we roll! We stayed for another week on Necker Island for the Necker Cup!

Check back soon for our post on Richard Branson’s Necker Island and the Necker Cup.

I hope that you found our BVI charter itinerary useful. If you decide to charter a catamaran in the BVI, we highly recommend Miss Kirsty catamaran.

Don’t forget that a bad charter crew can ruin your vacation, so choose wisely.