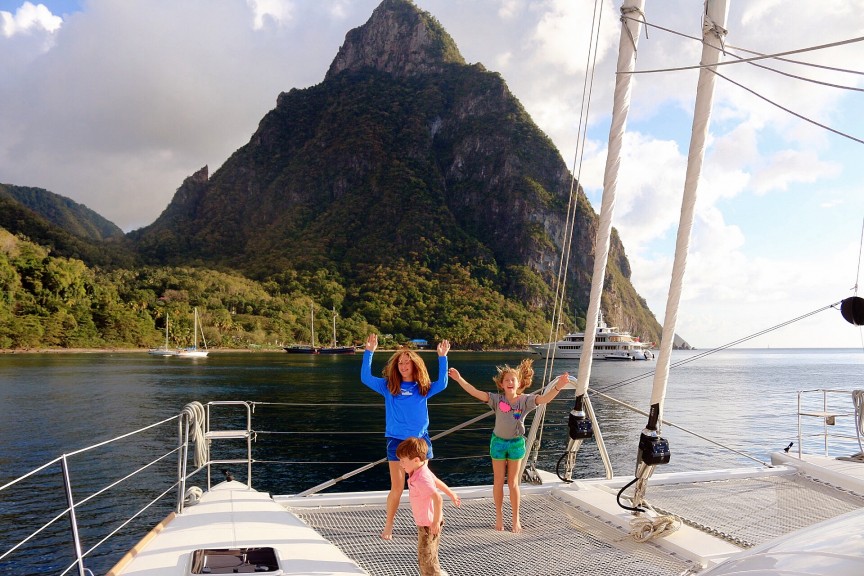 How NOT to Choose a Charter Boat in the Caribbean Daniel was turning 40, the kids were all at the right age, and we finally had a little extra jangle in our pocket. In my mind, the only thing that I had to worry about was finding the nicest charter boat available in the Caribbean!

I was wrong….very wrong. I don’t say that a lot, so you better listen up when I do.

From the very beginning of our search, I began to realize that booking a luxury charter yacht was not simple. First of all, there are A LOT of people involved. There are charter brokers, charter clearing houses, charter owners, and of course the captain and crew. We had to deal with all four of these people to get the boat booked. It was a royal pain in the ass.

On top of that, we had to wire the money to Australia to book it. Our banker looked at me like we had lost our minds.

While it is nearly impossible to eliminate the multiple involved parties, it is feasible to communicate directly with the captain about the trip before making a decision. (A caveat to my statements, is that you can go with one of the big companies like the Moorings who have streamlined the process. The companies with luxury yachts should follow suit!)

Had I spoken directly with the captain prior to booking this outrageously expensive vacation, I might have found out the following :

1- We were his first charter. Need I say more ?

2- Although they advertised that they can teach kite-boarding, they can’t…or won’t. I don’t know which it is, but the good news is that Evelyn learned to kite board anyway. Oh well, whats another $500 in kite-boarding lessons when you are already in this deep ? 4- There is no wifi, but the captain has it. Again, I am scratching my head.

5- The boat is equipped with air conditioning, but the captain does not turn it on. After a night of no sleep and a minor melt down on my part, he finally agreed to turn it on in the cabins at bed time.

In all honesty, this guy just does not need to be chartering this boat. We had more rules on this vacation than I have had since being grounded in high school.

For example, we had a “5 square foot rule of wet space.” We could not be wet on the boat anywhere other than the five square feet next to the swim ladder. Thus, each time the kids wanted to jump on and off the boat, we had to completely dry them off.

Don’t even get me started on his “dinghy rules.” You would have thought the dinghy was a $500,000 Rolls Royce. We were not allowed to wear shoes of any kind on the dinghy, including flip flops. The dinghy had a cover, and he put a towel over the cover before we could put our feet on the dinghy. It was a tad over the top. It was a rubber boat for goodness sake!

My blood pressure is starting to rise so I better move on to the positive points of this trip.

Have you ever heard of the saying : “Forced Family Fun?” Well, we literally had a week of it. I am being serious in that we bonded as a family like never before on vacation.

My girls played together like they were best friends, and did not get in one single argument over the course of the week. They were kind to each other, and Murray. Evelyn even read books to Murray during long sails. We played Go Fish with such enthusiasm that you would have thought we were actually winning something! They enjoyed and appreciated the beauty of the Caribbean without any worldly distractions. My teenager begged to play Go Fish & Headbands with her family each and every night.

Maybe God had a plan for our little family on this trip.

Even “Captain Fun Killer” could not ruin our family vacation at one of the most beautiful places on earth.

Tamala PrickettHow NOT to Choose a Charter Boat in the Caribbean04.10.2015