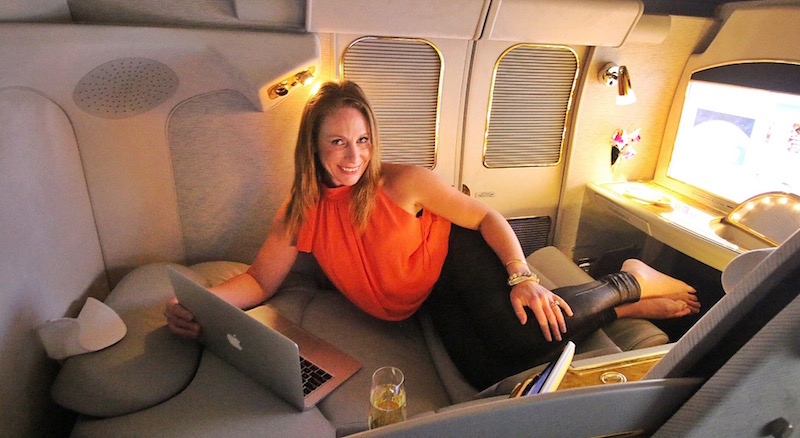 I decided to fly Emirates First Class for my 40th birthday trip. Who doesn’t want to fly in a private suite on a plane that has a shower and bar for their birthday? Duh! There wasn’t a snowball’s chance in lower Alabama that I could slip that credit card bill past my husband, so I looked into the option of using points.

I spent a little over 600,000 points for two Emirates First Class tickets from Houston to the Maldives with a stopover in Dubai. There were also fuel charges in the neighborhood of $1700 per person.  There are a ton of bloggers out there who do this a lot savvier and cheaper, but I was still proud of only spending points plus $3400! It beats $47K any day.

So I bet your wondering if it was it worth it. The short answer is …. hell yeah it was !!! Honestly, we did not spend enough time in Emirates First Class Lounge as it’s an experience in itself. I asked for a quick plate of fruit and cheese at the sit down dining area, and this is what I got : I wonder what the waffles and bacon looks like ?!

Champagne is flowing everywhere in the Emirates Dubai First Lounge, even at 8 am. Apparently there is also a spa with free treatments and sleeping areas. Like I said, I just wanted a little fruit and cheese before we boarded our plane.

The Emirates First class suite on the A380 and 777 is amazing. I’ve heard a lot of people say its “blingy” or “ostentatious.” I don’t know about you, but if Im about to drop 47K then BLING IT ON! The Emirates first class suite includes a personal mini bar along with an iPad to control everything from your suite door to your movie of choice. The food in First Class was equally fabulous as the suite. I had never tried caviar, and not surprisingly, I loved it !!

I also am not a huge wine drinker, but I wanted to order a nice glass of red. They sent me a sampling along with a box of Godiva chocolates. What else would you expect in Emirates First Class ? Honestly, we did not go to the Emirates on board bar as much as you would think during a 16 hour flight. It was too easy and comfortable in our own suite.

The Emirates on board bar is shared with the business class. It was surprisingly very large for a bar on a plane! Emirates also has appetizers, hot and cold, at the bar. The First Class has its own bar, but its only there in case you want to make your own drink instead of calling the flight attendant. Who does that ? Even more awesome than the Emirates on board bar, is the First Class Shower. There are actually two showers in First Class, and the experience is “pinch yourself” worthy. After your first class shower, there are two attendants waiting for you with a cup of hot tea.  The shower attendants, appropriately dressed in spa attire, turn the first class bar into a spa like display complete with a waterfall.

Once you return to your suite, there is a nice plate of refreshing fruit waiting for you.

As many of you know, the Emirates onboard shower and onboard bar only exist on the A380. Since we flew with Emirates on 4 different legs, we also had the opportunity to fly on the 777 in First Class.

Our Emirates 777 first class flight attendant suggested I try on her hat for a picture as she thought I would look cute in it. 🙂 Once our vacation in Dubai and the Maldives was coming to an end, we were facing another 16 hour flight with Emirates in First Class. My husband said : “I can’t wait to get back on that plane!”

I think that pretty much sums it up!

Check out our entire trip to Dubai and Maldives !