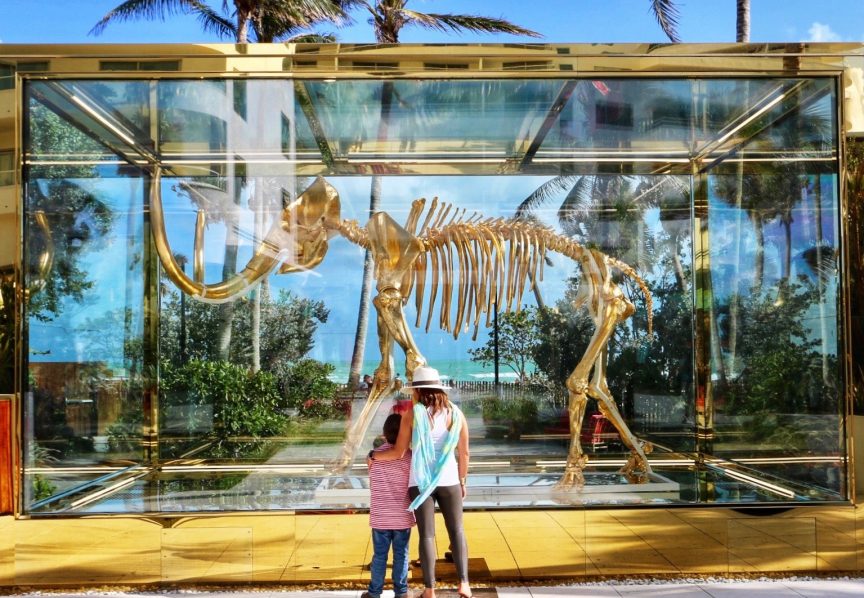 As I’ve said before, “Money is always and option! The Faena Hotel in Miami does not deserve the high price it charges, nor the 5 stars its been awarded by Forbes. In this Faena Miami hotel review, I will tell you the pros and cons we experienced during our stay. In my opinion, a high priced 5 star hotel should not fail in more than one category. Faena Miami failed in several.

In an effort to be fair, I will start with the positive things we experienced at the Faena Hotel.

2- The Food at Faena Hotel was very good, and the seafood was amazingly fresh. We were surprised to find grilled snapper on the kid’s menu, and even more surprised at the quality of the fish.

3- The lounge chairs at the pool and beach were spotless, and we appreciated having service at both locations. The service was not perfect, but it was more good than bad. 1- The Faena Hotel failed severely in terms of service. We booked an Ocean Front Jr Suite through the American Express Fine Hotels and Resorts Program. Amex FHR offers early check-in at 12pm based on availability. We were not upset that our room was not available for an early check-in as it is not guaranteed.

However, we expected our room to be ready at the regular check-in time of 4pm. The room was not ready until 5:30pm, and we had been there since 1pm. Even worse, they sent us to the incorrect room.

Initially, we were told that we would be in room 909 which was a “nice upgrade to a corner suite” according to the gentlemen who checked us in.  (Note: The upgraded room is offered through the American Express Fine Hotels and Resorts program.)  Instead, we were sent to room 915 which was not a corner suite. Honestly, I don’t know how they could even categorize the room as a basic Ocean Front Suite that we booked. The view was partially blocked.

Apparently, we were downgraded instead of upgraded. After we complained, they eventually sent us to a corner suite. We did not get that room until almost 7pm. Nonetheless, the view was lovely. All of this would have been far less of an issue if we hadn’t paid an arm and a leg for the room. I am embarrassed to even type the price tag of this room, as we don’t normally spend that much on a hotel room. Anyway, we expected better service for $1400 a night. Wouldn’t you?

The Butler service at the Faena is basically another number you can call on the hotel phone, and get re-directed to the appropriate department. We never met a Faena Butler, and really don’t think they exist.

3- A supposed 5 star hotel should clean your room and offer turn down service without the guest requesting it. We did not receive any turn down service our first night, and found our room untouched every other evening.

We were not in the room during the day, so there was no reason for the Faena cleaning staff to skip us. This leads me to the final, and most offensive part of our stay at the Faena Hotel.

4- I spoke with a guest relations manager at the Faena on the final evening of our stay. First and foremost, I wanted our sheets cleaned because my son had gotten sick early that morning. I told the resort manager all of the service issues we had encountered while he gazed off. I literally said : “I’m sorry if I’m boring you, but I thought you would want to know.”

He never apologized, but implied that we probably left the do not disturb light on our door. We didn’t.

As for the check-in disaster, he said that the hotel category of the first and second room they put us in were the same. They weren’t. Any dumb ass could see the difference in the rooms.

In conclusion, our stay at the Faena in Miami was a FAIL. Money is always an option, and I wouldn’t spend the high prices Faena charges again.